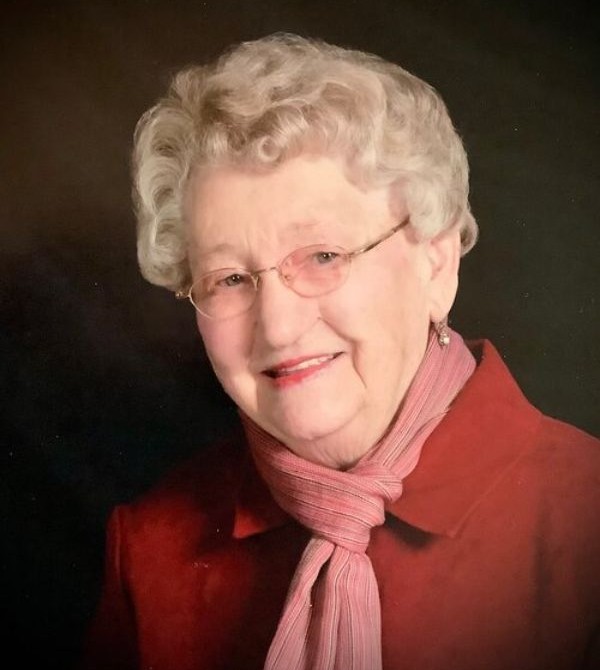 Virginia Kleinsasser Graber left the world a better place. With a positive attitude she gracefully made the best of each situation and treated others with kindness and respect.

She was born December 8, 1923 to Isaac and Emma Kleinsasser, and was baptized at Bethany Mennonite. Virginia attended Freeman Public School, Freeman Jr. College, and Dakota State University in Madison, SD. She taught first graders at Vermillion and Flandreau, SD.

They operated Royvin Registered Holstein Farm for 40 years, helping their children with dairy 4-H. In 1967 they earned the Ford Farm Efficiency Dairy Award for the highest milk production west of the Mississippi. Virgina and LeRoy hosted seven MCC trainees to work on the farm 6 months each. They were from Germany, Netherlands, Switzerland, and Korea.

She was a Girl Scout leader while teaching, a member of Merry Homemakers Extension Club, delivered Meals on Wheels, volunteered at Et Cetera Shop, and at Historic Peace Center in Maryland. She was president of Freeman Academy Auxiliary, chairperson of Schmeckfest, and was active in Salem Zion Mennonite Women.

Quilting was a favorite pastime, and she gave each grandchild a quilt she worked on. She was an avid gardener and loved music which included singing in church choirs.

Hard farm work with a pioneer spirit was also rewarded with trips to Europe, Iceland, New Zealand, Mexico, travel in the U.S, and fishing trips to northern Manitoba.

In 1985, Virginia and LeRoy retired from farming and moved to Freeman. During that time, Virginia worked at Salem Home for 16 years.

Preceding her in death were parents Isaac and Emma Kleinsasser, brothers Clarence and Jerry, husband LeRoy, and son Randy.

Virginia had immeasurable love for her family, community, and church.

Undesignated memorial gifts will be given to Freeman Academy and MEDA (Mennonite Economic Development Associates).

To order memorial trees or send flowers to the family in memory of Virginia Kleinsasser Graber, please visit our flower store.