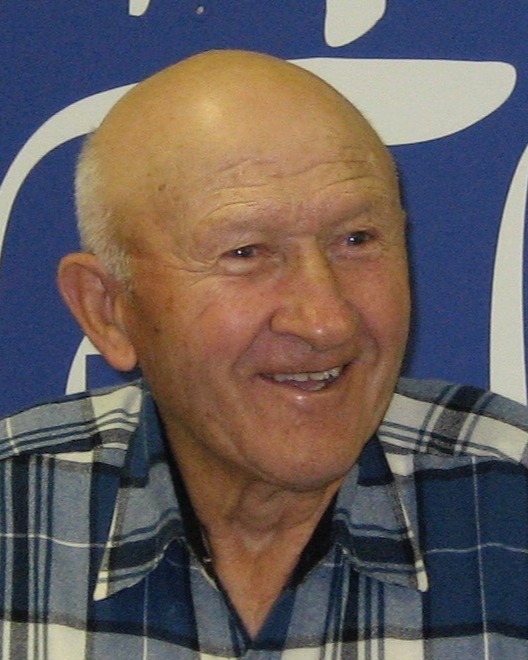 Funeral Services for Moses Glanzer will be held at 10:30 am on Saturday, Dec. 10th, at Hutterthal Mennonite Church of rural Freeman. Visitation will be from 5-7 pm on Friday, Dec. 9th, with a time of sharing at 6:30 pm at the Walter's Funeral Home in Freeman. Memorials will be directed towards Et Cetera Shoppe and Freeman Regional Health Services Foundation (Oakview Terrace).

To Livestream the Funeral Service click on the following link:  https://www.youtube.com/watch?v=Gyrt0lVDgfk

Moses Joseph Glanzer was born on December 27, 1925 to Joe P. and Theresa (Kleinsasser) Glanzer on a farm north of Freeman, SD. He died on December 5, 2022 at Oakview Terrace with his family by his side. He attended Summit District #51 School for eight years and then attended Freeman Academy. He returned to the farm to help his father with farming and the fur business. Upon his confession of faith, he was baptized and became a member of the Hutterthal Mennonite Church where he remained a faithful member until his death. In addition to teaching Sunday school, he was a deacon for a number of years and chairman of the building committee for the education wing in 1967.

In 1945, Moses was drafted and registered as a conscientious objector. He worked at CPS Camps in Terry, Montana and the New Jersey State Psychiatric Hospital in Marlboro, New Jersey.

On June 25, 1950 he married Reva Leder, and they eventually settled on a farm four miles west of Canistota. God blessed them with 54 years of marriage. To this union were born four children: LuAnn, Dorothy, Nancy, and Mark. After giving up milking cows and raising chickens for egg production, Moses and Reva focused on raising hogs and cattle. In 1965 he was named Master Pork Producer for McCook County.

Moses and Reva moved to Freeman in 1994 after retiring from farming, and they enjoyed fishing, traveling, and volunteering together. Their travels took them to Europe, Russia, Canada, Alaska, fruit drying in Reedley, CA and numerous other states. They both volunteered at the Et Cetera Shoppe where Moses learned the craft of weaving rugs on the loom. His rugs found homes throughout numerous states. Every year he donated rugs to be auctioned off at the SD MCC Relief Sale. In addition to volunteering at the Et Cetera Shoppe, he also volunteered at the MCC Meat Canner, Schmeckfest, and Oakview Terrace Nursing Home.

Moses loved being around people and frequently showed his playfulness, beaming smile, and sparkling eyes. He was always up for fishing with his brother Aaron or his numerous fishing buddies. He enjoyed participating in horseshoes.

In 2018, due to health reasons he moved to the Salem Mennonite Home and then transitioned to Oakview Terrace.

To order memorial trees or send flowers to the family in memory of Moses Glanzer, please visit our flower store.