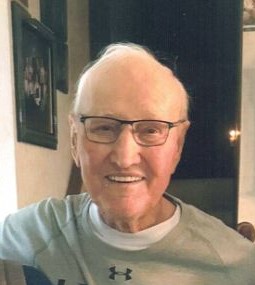 Johnny Graber, 88, of Freeman passed away on April 12th at Oakview Terrace in Freeman. Funeral Services will be held on Saturday, April 16th at 10:30 am at the Salem Zion Mennonite Church of rural Freeman. Visitation to be held Friday, April 15th from 5-7 pm at the Walter's Funeral Home in Freeman with a time of sharing at 6:30 pm.  To Livestream the Funeral Service click here https://www.youtube.com/channel/UCX8KyFlZChK0Ef-rlBAaS3A

Johnny James Graber was born December 22, 1933 to Joe and Marie (Albrecht) Graber. He entered his heavenly home peacefully in his sleep on April 12, 2022 at the age of 88 at Oakview Terrace after a year long battle with cancer. On August 26, 1956 he married Katheryn (Kleinsasser). God provided them with 45 years of marriage. Their union was blessed with two sons, Kerwin and Joey. After Katheryn’s passing in 2002, Johnny enjoyed 18 years of companionship with Cleo Kapsch who was a faithful friend until the end.

At the age of 3 Johnny’s mother passed away from pneumonia. His oldest sister Elta quit school to stay home and raise him in the home that their father homesteaded.

Upon confession of faith, he was baptized May 1, 1949 by Reverend J.J. Regier and joined Salem-Zion Mennonite Church where he maintained a faithful lifelong membership. Johnny was actively involved in choirs and other church life. He served on the Freeman Community Hospital board as well as the AMPI board.

Johnny began farming in his 20’s, living on the family farm. He milked cows until his retirement in 1998. He served an IW term as a milk tester. HIs entire life was dedicated to farming. Katheryn was active on the farm as well, helping with the dairy operation.

After their retirement, Johnny and Katheryn moved to town. They enjoyed traveling and planting many beautiful flowers. After Katheryn’s passing Johnny continued to garden, in his later years with the aid of his sons. He made the best dill pickles in Freeman! Johnny also enjoyed fishing and spent many hours at Lake Henry in Scotland as well as various other fishing trips. He spent many hours mowing the lawn at the arboretum, an activity in which he took a lot of pride.

Johnny was a man of faith. He relied on the Lord for his strength as he mourned the loss of Katheryn, and with any adversities that came his way. His devotional could always be found on his kitchen table, a daily practice that gave him encouragement and hope.

Johnny was preceded in death by his wife Katheryn, brother Hilbert and Erna Graber, sisters and brothers-in-law Elta and Hank Lehmann, Leora and Walter Ortman, Bernita and Neil Preheim as well as many Kleinsasser sisters-in-law and brothers-in-law, and many nieces and nephews.

To order memorial trees or send flowers to the family in memory of Johnny Graber, please visit our flower store.