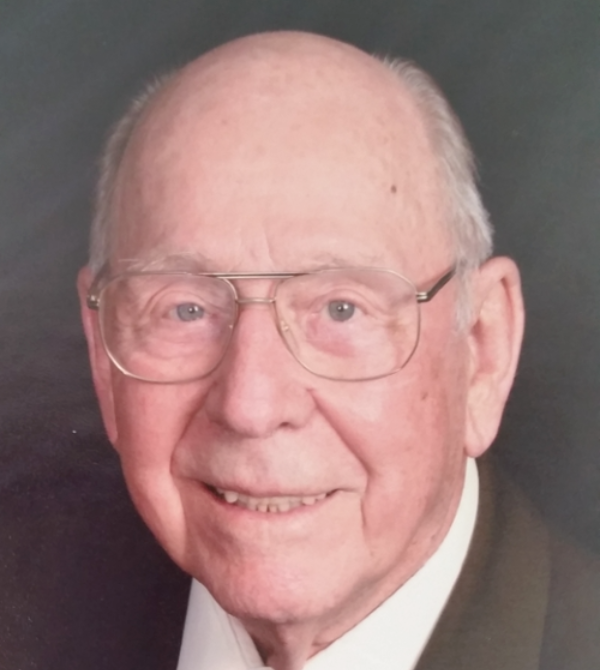 Jack was born in Spencer , Nebraska to Carl and Gertrude Ernst Vondra on May 9, 1925. He graduated from Wood High School in 1943. He served in the Navy from 1944 to 1946. After his discharge from the Navy he attended South Dakota State University before apprenticing as a watchmaker under the guidance of Dr. N.C. Lund in Bridgewater on April 4, 1947. Jack purchased Vondra Jewelry in June of 1951 from Dr. Lund and operated the store until 2017. On April 17, 1951 he married Lois Gaspar at St. Stephen’s Catholic Church. To this union they were blessed with 9 children. They celebrated 70 years of marriage.
Jack served as city treasurer from 1956 to 1972 and then as city finance officer from 1972 to 1986. He was also a representative of the Apache Group selling mutual funds from 1961 until 1963 when he become a representative for Waddell and Reed from 1963-1996. He served as Commander of the American Legion and was Adjutant of the American Legion for many years until 2017. He was a member of the Better Bridgewater Club and the Catholic Order of Foresters, served several times on the St. Stephen’s Parish Council, and was a lector and Eucharistic Minister at St. Stephen’s Catholic Church.
He is survived by his wife of 70 years and his children, Valerie (Bob) Mehlbrech, Dwight (Laurie) Vondra, Mark (Sherril) Vondra, Sheila Vondra, Chad (Kristi) Vondra; 23 grandchildren and 34 great grandchildren; a brother Ray and a sister Betty English.
He was preceded in death by his sons John and Steven, daughters Julie and Teresa, his parents , brothers Charles and Lawrence, and sisters Mary Sporrer and Patricia Coyle.
Pall bearers : Matthew Mehlbrech, Paul Vondra, Brett Vondra, Beau Vondra, T.J. Vondra, Drew Sendelbach, Luke Sendelbach, Sean Sendelbach, Zach Potter, Cole Potter, Tyler Schneider, Sidney Vondra, Samuel Vondra, and Ian Vondra.
Honorary pall bearers: Jennifer Castor, Becky Morse, Stacey Schneider, Ashley Fellows, Abby Hawks, Emily Hohn, Sadie Potter, and Hillary Vondra.
Funeral services will be held Saturday, Nov. 13, at 10:30 in St. Stephen’s Catholic Church in Bridgewater. Visitation will be held 5-7 p.m. Friday, the 12th with wake service following.

To order memorial trees or send flowers to the family in memory of John Frederick Gregory Vondra , please visit our flower store.