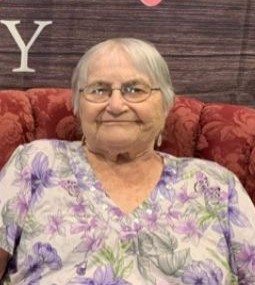 Jeanette Loretta Walz was born on a farm in Rural Freeman on October 6, 1935 to Oscar and Ella (Schamber) Walz. On Wednesday February 2, 2022 she passed away at Tieszen Memorial Home in Marion SD at the age of 86.  She was born premature so was baptized as an infant. She attended Freeman Public School where she graduated in 1953. After graduation she moved to Sioux Falls while she attended flight attendant school.  She was united in marriage to Dellis Dale Schrag on August 26th 1954. She and her husband later joined Bethesda Mennonite Church. They were blessed with two wonderful children Kathleen Kay and Robert Edward.  Jeanette ran a dairy farm with her husband Dellis as well as working in various businesses in Marion throughout the years.  When they sold their dairy cattle Jeanette began working as a dietary aide at the Tieszen Memorial Home.  She had a lifetime passion volunteering for many organizations, meeting with her SIS club, bus trips, and afternoon drives. Jeanette adored her three grandchildren and spending time with them.  Grateful for having shared her life are her son Robert and wife Kaye (Koller); grandchildren Wendy and partner Tony; Myranda and husband Daniel Moser; Robert and wife Jen(Sandoval). 7 great grandchildren; Emersyn, Jameson, Blaine, Hadley, Everly, Bentley, and Koryn. Sister in law Waneta Ragels; nephew Keith Bailey and wife Barb; niece Kristi and husband Bill Barber.  She was preceeded in death and greeted in heaven by her husband Dellis, her parents, her daughter Kathleen, and daughter in law Jean Ellen.

To order memorial trees or send flowers to the family in memory of Jeanette Schrag, please visit our flower store.