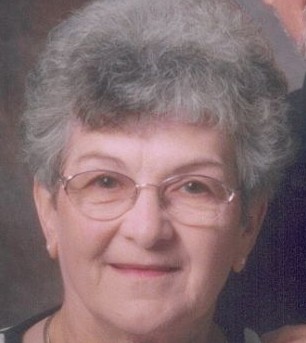 Esther Potter, 89, of Bridgewater passed away on Wed, Dec 8 at the Diamond Care Center in Bridgewater, SD. Funeral Services will be at the Neu Hutterthal Mennonite Church, rural Bridgewater on Sat, Dec 18 at 10:30 am. Visitation will be at the church on Fri, Dec 17 at 5-7 pm followed by prayer service & time of sharing at 7 pm. In Lieu of flowers, memorials can be directed to: https://www.samaritanspurse.org/ to aid Kentucky tornado victims.

Esther Elaine Potter, daughter of Ed K and Sadie (Wipf) Hofer, was born January 10, 1932, on the Elias P Wipf farm southwest of Bridgewater, SD. Esther attended county school District 101, her first two years of high school at Freeman Academy and completed her last two years at Bridgewater High School graduating in 1950. Esther then went on to attend Grace Bible Institute from 1950-1951. On September 2, 1953, Esther and Robert J Potter were married, and after only two weeks of marriage, Bob left for the service and was away for 18 months. While Bob was stationed in Germany, Esther lived with her sister Violet and family, and she worked at Benny’s Market in Bridgewater. In April 1955, when Bob returned, they began their married life together living on a farm north of Bridgewater. In 1960, Bob and Esther moved back to the home place of her mother’s family, the Elias P Wipf farm, living there until she moved to Grandview Assisted Living in Bridgewater in December of 2017. In May of 2018, after a fall, she then became a resident at Diamond Care Center, also located in Bridgewater. Esther went to be with her Lord and Savior on December 8, 2021, at the age of 89 years and 11 months.

Esther was a member of the Neu Hutterthal Mennonite Church her entire life and she was a faithful servant to her church community. Esther served as a Sunday school teacher and Sunday school superintendent, taught Vacation Bible School, was a member of the choir and many small groups, was active in the ladies Willing Works Organization, and served the congregation wherever there was a need.
Esther and Bob had a busy farm life and raised three children together. In addition to being a loving and dedicated wife and mother she was a homemaker, a gardener, and fully supported their farm life together. In 1972, Esther started to work in the kitchen at the Diamond Care Center in Bridgewater as a CETA temporary job placement to earn money for Christmas. That temporary job led to over 35 years of employment. While working at the DCC, she furthered her education and earned a certified dietary manager certificate from Presentation College in Aberdeen, SD and became the Dietary Manager at the DCC. She enjoyed her work and was a dedicated employee. Esther brought a special kindness and care to the residents she served and the people she worked with.
As the retirement phase of life began, she enjoyed reading and studying about the history of the Hutterite people. She had books and her own journals full of notes on the subject. She also spent hours reading and enjoyed listening to gospel music. Esther had a variety of friends throughout her life, from church, work, and past experiences, and she loved spending time with each of them when time allowed.
Esther lived up to the saying, “Faith, Family and Friends”. She was not afraid to share her God of love, peace, and understanding, and had a gift to accept and love those who needed extra care and attention. As a young child, Esther had grown up with her grandmother, Susana, living in their home. Being on the home place meant aunts, uncles, and cousins would come to visit them and Susana regularly. She looked forward to these visits with her family and extended family. With all these visitors to the home place in her earlier years, Esther perfected her talent and passion for welcoming guests and serving delicious food to all who sat in her kitchen. She had a special knack for baking and a seemingly effortless ability to pull together a full spread on short notice. Not only was her cooking plentiful and delicious, but the conversation and laughter was equally fulfilling. You always left her table knowing that you were loved and that you belonged there.
Esther’s greatest passion after her husband was her children, grandchildren, and great grandchildren. She loved spending time with all of them and each one of them knew they were special to her. Esther took great pleasure in watching them grow and was heavily involved in their lives. She attended school and sporting events to cheer them on and made a point to stay connected with those who lived farther away. She patiently played with her grandchildren and great grandchildren, making every visit fun and memorable. There were many walks down to the creek or bridge and she enjoyed telling stories along the way. Her pantry was always fully stocked with food and snacks. She kept her freezers full of cookies, bars, and special treats, and she knew everyone’s favorite kind to keep on hand. Esther always emphasized the importance of knowing Jesus, saying your prayers, and attending church. She demonstrated her Christian faith and servant heart to everyone who walked through her door. Leading by example and through the power of prayer she served your spirit; her wholesome and plentiful comfort food fed your body; and the warmth of her welcoming embrace and unconditional love transformed the feelings and thoughts of your mind and provided peace. Her presence made “going down to the farm” have a truly special meaning of entering a place where you would be nourished in mind, body, and spirit, would find the warmth of her love, and would always be welcome.
Those left to cherish her memory are her daughter Loree (Ron) Hanssen, Hebron, KY; her son Kim Potter and her son Kenn (Robin) Potter all from Bridgewater, SD. Esther had 9 grandchildren and 12 great grandchildren; Cassandra (Derek) Marshall, Kyrsten and Dylan Marshall, Powhatan, VA; Andrew (Angelique) Hanssen and Aaron (Taylor) Hanssen, Christopher and William Hanssen all from Burlington, KY; Zachary (Rachel) Potter, Olivia Potter, Salem, SD; Emily (Kelly) Hohn, Reese, Sawyer, Collins, and Magnolia Hohn, Parkston, SD; Sadie Potter, Ft Collins, CO; Cole Potter, Mitchell, SD; Seth (Jaclyn) Potter, Everett and Ellee Potter, Bridgewater, SD; and Mollie (Chase) Lage, Isla Lage, Sioux Falls, SD. Her sister LaVonne Tschetter, Freeman, SD; sister-in-law Janet Tiede, St Louis, MO and brother-in-law Ben Engbrecht, Sioux Falls, SD; and 4 nieces and 5 nephews.
Esther was preceded in death by her husband Robert, her parents, sister Violet Engbrecht, brother Vernon Hofer, sister Nancy Hofer and daughter-in-law Teresa Potter. Her brother-in-law and sister-in-law Joseph and Glenda Potter; brother-in-law and sister-in-law Jay and Marge Bollinger; brother-in-law Russel Tiede; brother-in-law Melvin Tschetter and 3 nieces and 2 nephews.

Prayer Service and time of sharing at 7 pm