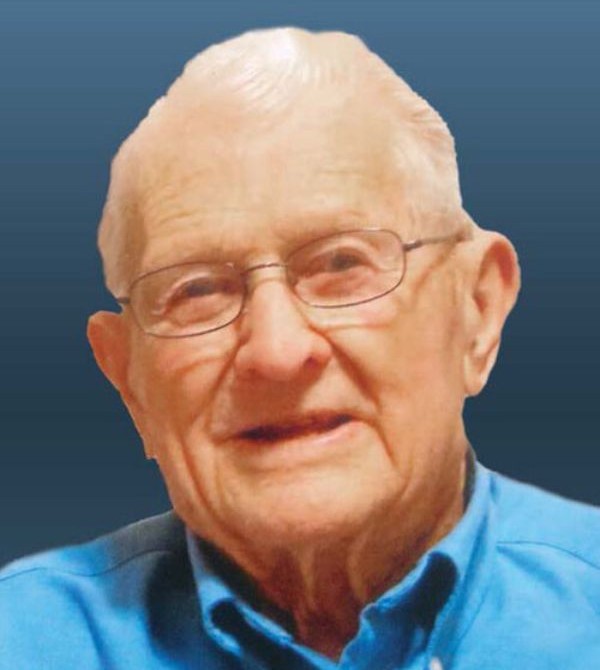 Allen Schrag was born on Sept. 20, 1924 to Rev. John and Katie (Miller) Schrag and raised on the family farm south of Marion, S.D. He was the eighth of nine children.

He was baptized June 1, 1941 at Salem-Zion Mennonite Church where he remained a faithful member. Dad served as a Sunday school teacher and trustee. When COVID-19 started he watched church services on his laptop.

Allen attended Country School District #15 where some of his teachers were his own brothers. He then graduated from Marion High School in 1942. After graduation, he helped his father on the farm as well as working as a mechanic for Al Rapp.
On Aug. 19, 1948 Allen was united in marriage to Ardelle Ries at the Salem Mennonite Church. They made their home on Allen’s family farm and continued the operation raising chickens, hogs, cattle, corn and beans.

During this time, they were blessed with three children: Lola, Rita and Dean.
In 1984 Allen and Ardelle moved to Marion, but Allen continued helping his son Dean on the farm. He drove the combine until 2017, at the age of 93. He also sold monuments for Mollet Memorials.
Over the years Allen served on several boards including School District #15, Rosefield Telephone, Township, Farmers Co-Op Elevator, Salem Mennonite Home and the Marion City Council. Most rewarding was serving with Mennonite Disaster Service at the local, state and Region 3 levels.

In his spare time, Allen enjoyed woodworking, photography, fishing with his brothers, watching the Minnesota Vikings, going to coffee after moving to Marion and putting together jigsaw puzzles (often 1,000 pieces)! He would take pictures of the completed puzzles and hang them in his office.

Allen & Ardelle lived independently until January 2021 when they moved into the Tieszen Memorial Home.

Dad passed away Aug. 18, 2021 at the Tieszen Memorial Home a month before his 97th birthday and one day before their 73rd wedding anniversary.

To order memorial trees or send flowers to the family in memory of Allen Schrag, please visit our flower store.